See all posts
August 11, 2021
Strong Support for the Building Together Mission 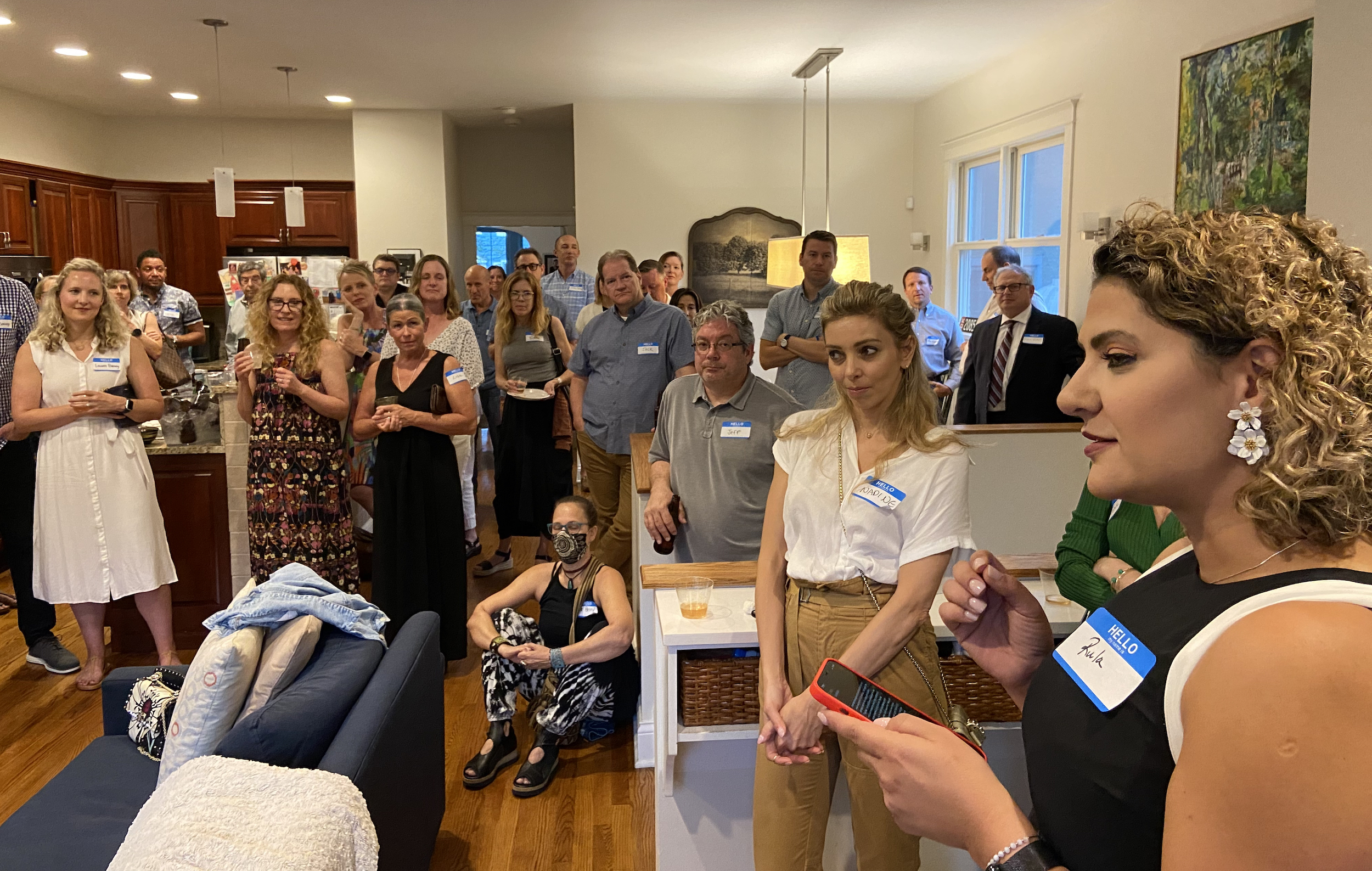 Building Together (BT) fundraisers around the United States this summer reveal strong support for the organization’s mission to develop joint Palestinian and Israeli initiatives that increase mutual respect, trust and quality of life.

“I knew right away when I was asked to join the Board that I need to be part of Building Together. The fact that the main focus of our NGO is to bring the two sides together, where the world failed throughout history many times, was a no-brainer to me,” said Rula Abu-Rajab (above at far right, addressing fundraiser guests), Global Marketing Manager at Abbott Diagnostics. She was speaking to guests at the first fundraiser in early July, co-hosted by her fellow BT Board member Andrew Ross.

Welcoming the crowd of 40+ to the Chicago home he shares with his wife Shari Roth, Mr. Ross spoke about his grandfather, RobertForster.

“I want to tell you why being involved in Building Together is such a personal and passionate project for me,” he began, and described his grandfather’s path. Born in 1903 in a small Czech town, Robert Forster was a structural engineer who helped construct the Czech pavilion for the 1935 World’s Fair in Paris. Four years later, he kissed his family goodbye and went to New York City to work on the 1939 World’s Fair. Soon after, in March of 1939, Hitler invadedCzechoslovakia.  All of Robert’s immediate family was killed. He carried survivor’s guilt for decades, but still built a fulfilling life in America. “Robert Forster, my grandfather and one of my closest friends, has been gone for almost 25 years, but I try to honor his legacy every day by upholding those values he imparted to me,” Mr. Ross told his guests.

“Those values are what Building Together is all about. We are an apolitical, multi-faith board and organization dedicated to promoting mutually beneficial and tangible economic development opportunities on both sides of the border with people who have never interacted with one another outside of military situations,” he said.

His guests listened intently. “You could feel the buzz of excitement and interest in our work envelope the room,” said BT President and CEO Roland Lewis, describing the scene later.

Contributions poured in, especially after Mr. Ross described Building Together’s current project. “We are working with Israeli and Palestinian date farmers, who toil under the same sun and use the same water to harvest the same fruit, which they are working together on to turn into date honey to sell locally and across America,” he said.

A week later, people gave generously at another BT fundraiser, this one in the Poconos at the home of Board member Andrew Wilshinsky and his wife Julie. A few days after that, the BT summer fundraiser series arrived in Boston, where guests heard about the organization’s goals while taking in stunning views of the town and harbor at the Boston College Club.

“All in all, it was a very successful series of events,” Mr. Lewis commented. “We raised tens of thousands of dollars and we established important new relationships that will help Building Together grow. Congratulations to all.”